by The Ocoee River Barn

Megan and Erich met at the young age of six when they both attended Blue Springs Elementary School. Erich’s family and Megan’s cousin were neighbors. Through this connection, Erich’s Mom started taking both Erich and Megan to school and Erich would ride the bus home with Megan once school was over. This continued through the third grade. Erich and his family moved to Polk County after this and Megan would not see them again until 16 years later. They found each other on Facebook in July 2016. Their first date consisted of a Monterrey’s dinner and fro-yo from Orange Leaf. They laughed, told stories, and reminisced about their time together as kids. This was also the day that Erich knew he wanted to spend the rest of his life with Megan. 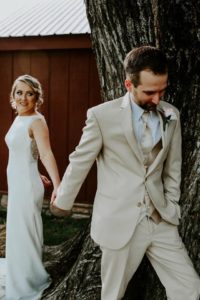 Megan wanted to visit New York again for quite a while. So, she planned a trip with her mom, brother, and the love of her life. Erich knew this would be the perfect place to propose to Megan. He initially wanted to ask her to marry him in front of the Statue of Liberty but, they were not able to get on the island that day. Erich knew they would be going to Central Park later and decided that would be the place.
On May 28, 2017 he proposed, on top of a rock, in the heart of New York. The wedding took place on May 4th, 2018 at Ocoee River Barn. “Our favorite part about the barn was the lights. It was perfect for our rose gold glam decor!” There was plenty of space for both sides of the family and even more space to dance the night away.

“My favorite moment from the wedding was when Erich lost it as I walked down the aisle.” The following day Megan and Erich left for Ireland to spend their honeymoon traveling the gorgeous green landscape. They began their tour in Dublin. Driving to the west coast towards Galway and made a big circle ending up back in Dublin on day ten. The west coast was the best part of Ireland, they said, and the mountains and lakes were indescribable.